The climate change locomotive is bearing down while we stand frozen on the tracks.  Those with sight have seen it coming for a while. Those with hearing can hear it. They cry out in vain. “Please stop the train, we are frozen on the tracks and we cannot move.”   The politicians and business owners driving the train reply. “We will not the stop this train, it is taking us to a good place where we will all be rich.” “But the train will kill us all.” “Now you are being alarmist.”
Greed and self-interest can only take you so far.  We all want a comfortable life and in Australia most of us have everything we need. We have peace, prosperity and security and we take it for granted that we will always be fed, clothed and sheltered and looked after when we are sick. We have compassion for those experiencing droughts, floods and fires but most of us are not directly affected. We are sad for the flying foxes dying in their thousands in a heat wave but a bat is a bat. It is inconceivable that it will be us dying in our thousands as vast areas of the planet become uninhabitable. The right winged shock jocks contend that you would need to be off with the fairies or a greenie alarmist to believe that there is genuine peril on the horizon.  And yet that is what 97.2% of the published papers on climate science are forecasting https://thebulletin.org/2019/08/millions-of-times-later-97-percent-climate-consensus-still-faces-denial/.   But what about the other 3% the deniers shrilly cry?  These so-called scientists cannot agree on anything.   But here’s the interesting thing.  There is no credible 3% alternate view. https://qz.com/1069298/the-3-of-scientific-papers-that-deny-climate-change-are-all-flawed/. The other 3% are shonky papers that do not pass scrutiny. They cherry pick, they misinterpret and their data is not reproducible.  They are also invariably funded by those who believe that their business interests are threatened by action on climate change.  There is no credible alternate view. None! Don’t believe me! Well, have a go a finding one like I did. Each and every alternate view Paper will have been pulled apart by a multitude of credible scientists and exposed for what it is. A fraud. And yet the newspapers are full of “alternate views” by uncredentialed people living in some kind of alternate reality or by outright liars. And they are believed by many because it is easy to believe what is convenient. The people that write this stuff, the trolls on social media and the self-interested politicians with their populist agenda are evil and by their efforts they have managed to move the doomsday clock 40 seconds closer to midnight  https://www.npr.org/2020/01/23/799047659/the-end-may-be-nearer-doomsday-clock-moves-within-100-seconds-of-midnight . The social media trolls frequently call those advocating for urgent action on climate change alarmists. Well, anyone who is not alarmed by what is happening must be truly mad.
·         Glaciers and polar ice in rapid retreat.
·         Pacific nations disappearing beneath the waves from sea level rise.
·         Great Barrier Reef bleaching and dying.
·         Flying foxes dying in their thousands in summer heat waves.
·         Unprecedented floods, droughts, fires and cyclones.
·         Collapsing ecosystems and particularly in the oceans.
·         Disease, war, famine and the displacement of millions of people as a consequence of unprecedented drought and food shortages.

And all this with a 1 degree above normal increase. What’s it going to be like at 2 degrees, 3 degrees or more. Or perhaps a runaway greenhouse effect that will create a lifeless earth with rivers of molten lead like Venus! Now I am being alarmist.
The damage already done by climate change is incalculable. Perhaps already sufficient to destroy our civilisation and much of our biodiversity once things equilibrate. But it could get much worse. The mythical 2oC safe level rise is not and never was any kind of safe level but it may be one our civilisation might tolerate and much of our biodiversity might remain. We can still achieve this if we have the will. The first priority is to take on the liars. When people repeat lies that they have read in the newspaper or heard from their learned friends in the pub call them out. The same goes for politicians. We need zero tolerance for the mythical alternate view. 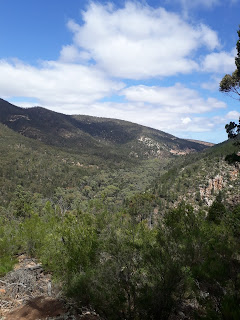 
Reflecting the sun
In a remarkable way
Under old Sugar Gums

Gill jumped sideways! It was she who had heard the faint movement of a rock as the Eastern Brown Snake made its way down the slope. I stood still for a while mesmerised by the beauty of its golden scales shimmering in the morning sun. Silently and slowly it slithered towards where I was standing on the Sugar Gum lookout in Mount Remarkable National Park. The view to the west down a deep wooded valley is one of the best in the Southern Flinders Ranges and it was a magic moment. Magnificent scenery, a glorious spring day and a beautiful animal peacefully going about his business.  He silently disappeared into a rocky fissure and we made our way back down the slippery slope towards the Mambrey Creek car-park.

Posted by Sustainable environment at 8:45 PM No comments: 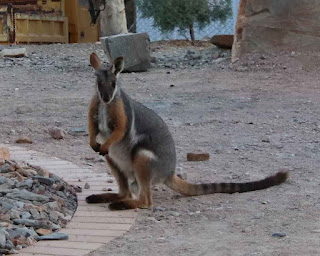 I am finding it increasingly difficult to remain optimistic about our future. In Australia in particular there is a lack of political leadership to address the issue of climate change despite increasing community acceptance of climate science. The health of the Great Barrier Reef continues to deteriorate, we have unprecedented fires in rain-forest and, ongoing major fish kills in the Murray Darling Basin. When we visited Arkaroola in the northern Flinders Ranges in  April it was heart-breaking to see the parched valleys littered with Euro and Yellow-footed Rock Wallaby bones. The Rock Wallabies rely on dew for water and there has been no dew in that area for 4 years. The wallabies  are coming into the homesteads in the quest for survival. And yet, somehow, despite the evidence all around us we remain locked in a cycle of denial and inaction. There has, however, been a shift in the denial process. As the science becomes overwhelming the outright denial that there is an issue is becoming rarer. There is more stage 2; "Ok we accept that the climate is changing but it has nothing to do with human activity" or stage 3; "Yes we are contributing to the problem but the consequences are being greatly overstated by climate alarmists". Unfortunately the situation is worse than most people think. The death of a 400 km strip of coastal mangroves along the Gulf of Carpentaria last week gets a small mention in the news and is promptly forgotten. Thousands of heat stressed flying foxes dying in Cairns and Adelaide last summer barely rates a mention. We are in deep trouble and it's going to get worse. And our response to this as a nation was to reelect a Party of climate change denialists at the last election. We have no choice but to soldier on. We have lost much but we still have much to save and each of us can make a difference. 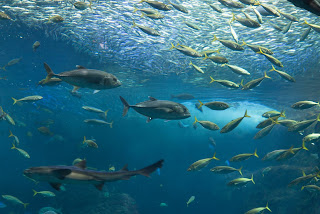 Bull Sharks, bronzies and great whites
Stripy tigers in the night
A hammerhead in full flight
A wobbie slinking out of sight

I love sharks!  They scare the hell of me but they are wonderful. You can mitigate the risk of being attacked by a shark but the risk is always there.  I am hyper-aware of sharks when snorkelling in Spencer Gulf. I have seen the 5.5 m cast of Shaka the shark in the Port Pirie Visitors Centre. At any moment I know she will emerge from the depths with jaws agape. Perhaps I should do something safer. Like drive to Adelaide. 70 people have been killed on the roads in South Australia this year. A few years ago there was a fatal shark attack in South Australia.

What we struggle with is the illusion of safety.  There is no evidence that shark culling improves swimmer safety. The removal of 10s of thousands of sharks from Queensland and NSW waters has not secured swimmer safety. Shark attacks still occur despite the decline in some cases of greater than 90% of some species of sharks.  But voters need to be reassured and we can’t afford to scare away the tourists so we persist with bad policies. There are other options. We can use drone surveillance, we can use sonar detectors, we can use shark- shields and, if we are really scared of sharks, we can keep out of the sea. It’s not just a question of culling or not culling because we like sharks or don’t like them. The collapse of the population of apex predators will lead to the collapse of marine ecosystems and fisheries.  That's a disaster and it’s already happening. We live in a world where decisions are made on emotion and belief. We need evidence based decision making. We need politicians to accept the advice of experts and we need to educate the general public. A political party with a Policy of shark protection will get my vote every time.